It’s summertime, and that means it’s time to learn how to make Mexican street corn! As a side dish for everything from the perfectly grilled strip steak to the more casual, yet decadent butter burgers, it’s pretty hard to beat this corn recipe in the summer. Or anytime of the year, more on that later.

If you’ve ever been to a county fair and had street corn, or the more authentic version while in Mexico (which is where I first had this as a young Marine), you know it’s delicious.

I absolutely love this side dish and if I’m being honest, I’ve been known to put down a half dozen ears at a sitting—making a meal out of this alone. One of the best parts of this recipe is that, while it looks complicated, it’s actually pretty easy to make, and offers a ton of options in terms of what to dress it with.

This grilled Mexican street corn recipe is a guaranteed crowd-pleaser at your next cookout!

Why Do They Call It Mexican Street Corn?

Quite simply, this is a very popular street food in Mexico. Having spent a decent amount of time in Mexico as a young man living in San Diego, I’d say street corn is about as abundant as street tacos, and of course those hot dogs wrapped in bacon.

Side note, 10/10 don’t recommend the hot dogs in Tijuana. Just trust me on that one.

In any case, elotes, are called Mexican street corn because that’s where this finger licking grilled corn originated. It’s similar to why we call chicken wings, Buffalo wings — that’s where they got their start.

What Corn Is Best For Mexican Street Corn?

I love to use fresh sweet corn in the summertime. The sweetness of fresh corn on the cob is the absolute perfect match for the spices, the chopped cilantro, and the Cotija cheese used to make Mexican street corn. That said, this treat can be enjoyed all year long.

First, you can blanch and freeze fresh summer sweet corn, saving it for the long winter months when fresh local corn isn’t available. The draw back to that is that it takes up a ton of freezer space, which brings up the next option.

Can You Use Frozen Corn to Make Mexican Street Corn?

Yes, you can for sure. You can find frozen corn on the cob in just about every grocery stores frozen food section. It’s obviously not as good as fresh sweet corn in the summer, or the stuff you freeze yourself, but it’s still really good.

When I use frozen corn, I make use of a wooden skewer to grill it. A skewer makes it much easier to grill corn on the cob, since the husk isn’t there to grab and turn the ears of corn.

What Is a Good Substitute For Cotija Cheese?

I absolutely love the mild and slightly salty flavor of cotija cheese. That said, it can be difficult to find in some geographies. So what can you substitute for cotija cheese?

Parmesan. If you can’t find cotija cheese locally, you can use parmesan in its place for this Mexican street corn recipe.

Another option is to use queso fresco. It’s more moist than cotija cheese, but the flavor is similar and it also works well with grilled corn on the cob.

Do You Have To Soak Corn Before You Grill It?

This depends on the type of corn you’re grilling. If you’re grilling frozen corn with no husks you don’t need to soak it. You should, however, boil it for a few minutes before charring the corn kernels on the grill.

If you’re grilling corn on the cob in the husk, I like to soak them for 10-15 minutes. This doesn’t necessarily help cook the corn, rather it keeps the husks from catching fire when on the grill.

Not soaking the corn isn’t the end of the world. You may have some burnt corn husks to deal with, but the corn itself will turn out just fine.

Step 1: Set up your grill for two-zone cooking and establish the temperature at 350 °F.

Step 2: While the grill is preheating, soak the corn in water. Then, whisk together the mayonnaise, half of the cilantro, lime juice, 1 tablespoon of bbq rub, salt, and pepper in a mixing bowl.

Place this mixture in the fridge, allowing the flavors to meld. Alternatively, prepare some of this flavor packed compound butter which is also excellent on grilled corn.

Step 3: Once the grill has reached 350 degrees, place corn on the grill in the indirect heat zone, leaving the husks on for 30 minutes.

Step 4: Remove from the grill and peel husks back. Be careful when doing so, the steam inside the husks is HOT! Sadly, I know this from experience. Return the corn to the grill over direct high heat and char the corn kernels. Turn often so as not to burn.

Step 5: Remove from the grill and brush corn thoroughly with a thin layer of the mayo mixture.

Pro tip: If you’re only doing a small amount, like we are here, I use a spatula. If you plan on preparing a few dozen ears of corn, I find it’s easiest to use a piece of bread coated with the mayo and lightly grip the corn with it to wipe it on. It goes much faster that way.

Step 6: Spoon the cotija cheese onto the corn, thoroughly coating the mayo mixture.

Step 7: Then, season with bbq rub, or a simple chili powder and Tajín mixture, and finish with more cilantro and fresh lime as desired. 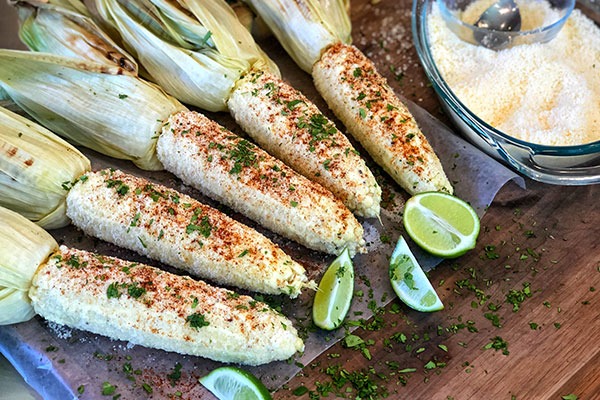