Now, I enjoy the process of grilling with charcoal, incorporating some smoke into certain meats, and tending a fire. I also know not everyone, most people in fact, don’t have a charcoal grill. So this blog is all about teaching you how to barbecue ribs on a gas grill.

Here, you’ll learn the principles of low and slow cooking on a gas grill. So, it doesn’t matter if you’re grilling baby back ribs, or spare ribs — the principles are the same.

At the end of the blog I’ll offer some tips for making bbq ribs on a gas grill. I strongly encourage you to read those carefully. It’ll take just minutes and you’ll get some great value from those.

How Long Does It Take To Grill Ribs on a Gas Grill?

Cooking ribs low and slow on a gas grill takes about the same amount of time as grilling them on a charcoal grill or a pellet grill. You should anticipate about 3.5 hours.

3.5 hours isn’t absolute of course. How many racks of ribs you’re cooking, your grill’s ability to hold a steady temperature, and “meatiness” of the ribs will change the overall cook time somewhat.

What Temperature Do You Cook Ribs on a Gas Grill?

You’ll actually be running your grill at two different temperatures. Starting at a lower temperature first, 255°F, and then increasing temperature to 285°F after you wrap the ribs.

Wrap the ribs? Yes. You can use either aluminum foil or butcher paper, but wrapping is imperative when making bbq pork ribs on the grill. More on this later.

For the temperature setting, I can’t recommend enough the use of a reliable leave-in thermometer. I know your grill has a thermometer in its lid, don’t trust it.

Let’s assume the thermometer (which has likely never been calibrated) in your grill’s lid is accurate. It’s not, but let’s assume it is. It’s reading temperature in the upper part of the grills lid, not on the cooking grate where the food is.

The temperature in the grill’s lid is much different (50° or more) than the temperature at the cooking grate in the indirect heat cooking zone.

Using a leave-in thermometer allows you to know exactly what the temperature is, where your food is cooking. And cooking ribs at the right temperature is one of the keys to turning out amazing ribs.

Should Ribs Be Wrapped in Foil When Grilling?

Absolutely! Wrapping pork ribs in aluminum foil or butcher paper isn’t simply for maintaining a beautiful color. Wrapping them also helps them cook faster and more importantly helps to break down the connective tissue; helping get them tender.

I prefer to go by a visual inspection when determining when to wrap the ribs. I’m really looking for color and bones when I decide on when to wrap them up. Leaving them unwrapped for too long won’t ruin them, but they will get darker than most people find visually appealing, and take longer to cook.

So, when you start to see some bones peaking out on the side of the ribs, and the color is a nice bright red or mahogany, it’s time to wrap them up. This usually happens after about two hours on the grill.

Can I Smoke Ribs On a Gas Grill?

Most certainly. I won’t go so far as to say you’ll get stick burner type smoke, but you can definitely impart some great smoke flavor by using some inexpensive accessories.

Wood Chips: These work great in either a smoking tube or a homemade aluminum foil packet. To dispel a myth about wood chips, don’t soak them in water. Water doesn’t make them smolder or smoke any longer. They just sort of steam for a bit to burn off the water before they start smoking.

To make a foil packet, just pull off a sheet of aluminum foil about 24 inches long. Then, fold it in half, put about 1 cup of pellets or wood chips on the foil and fold up the edges to create a packet of wood or pellets. Then, poke several holes in the top of it for the smoke to escape.

Pellets: Pellet grills are gaining a ton of popularity these days and some of those pellets provide some great flavor. They can be used on a gas grill in the homemade aluminum foil envelope or an inexpensive smoking tube.

Whether you’re using wood chips or pellets, an aluminum foil packet, or a smoker tube / box, all you need to do is place it over an active burner.

Within a few minutes the pellets or wood chips will start to smoke, and that beautiful smell will fill the air and start to flavor your food.

How To Set Up a Gas Grill for Smoking Pork Ribs

To smoke pork ribs on a gas grill, you need to set up two different zones of heat. This requires at least two burners on your gas grill, but three is preferable.

By lighting one burner, and leaving the other burners off, you’re able to create what is essentially an oven, with the added element of smoke.

Because there is no direct heat source, and the temperature is being kept low, the pork ribs can come up to temperature slowly. Rendering fat and breaking down connective tissue along the way, without burning them.

Tips For Making BBQ Ribs On a Gas Grill

The Wrap: In order to get the ribs tender, and to save the beautiful color, be sure you wrap them tightly with foil or butcher paper.

The Thermometer: Don’t trust your grills thermometer, use a reliable leave-in thermometer so you know the temperature at the grill grates where the ribs are cooking.

The Smoke: Pellets or wood chips, fancy box or foil packet, just leave it over the direct heat of the grill and it will produce a nice smoke for your ribs. You don’t need to see so much smoke that you think something’s on fire. Clean smoke is almost transparent, and clean smoke is a must for good flavor.

The Moisture: Gas grills tend to offer a pretty dry cooking environment, because they don’t seal like a Kamado style grill. This means you’ll need to spritz the ribs every hour to keep them moist.

The Lid: Keep it closed as much as possible. Once you close the lid, don’t be peeking in on the ribs, no matter how tempting. That lets the heat and smoke out.

The Doneness: Check here for an in-depth look into how to tell when pork ribs are done. The bottom line, they should be super tender and juicy, but not “fall off the bone.” You want to be able to bite into them, without the meat falling apart.

The Plan: Don’t just buy some ribs, and dive in. Do a test run with your grill and thermometer first. Know what position of the gas knob will achieve what temperature in the indirect zone of the grill. Don’t try to figure that out with ribs on the grill.

Overall: This blog is about the technique of setting up the grill. It’s not about the bbq sauce, the dry rub recipe, or the rib preparation or removing the membrane. For that information, I’d encourage you to read this blog about how to make barbecue ribs.

How To BBQ Ribs On A Gas Grill

Step 1: Light one burner of your grill, place the pellets or wood chips over the active burner and close the lid. Allow the temperature to stabilize in the grill at 255°F as indicated with a reliable leave-in thermometer.

Step 2: Place the seasoned ribs, bone side down on the grill over indirect heat. Close the lid and let them go for 45 minutes without peeking.

Step 3: While the ribs are on the grill, mix the apple juice and vinegar into a spray bottle. After 45 minutes on the grill, spritz the ribs for the first time.

Work quickly and close the lid as soon as possible. Then, spritz the ribs every 20 minutes until the ribs have been on the grill for about two hours total. This can change by a few minutes either side of two hours, depending on the color of the ribs.

Note* Another great indicator of when it’s time to wrap, is seeing the rib bones just start to peek out.

Step 4: Remove the ribs from the grill, close the lid and adjust the heat to maintain 285°F. The ribs should have a nice color and should bend slightly when held.

While the grill is heating up, wrap the ribs tightly in aluminum foil or butcher paper. Before sealing up the wrap, add a couple tablespoons of the juice and vinegar mixture to the ribs. This helps to get them tender.

Tip* If you like a sweeter rib, also consider adding some butter, honey, and brown sugar to the wrapped ribs. This is pretty common in the world of barbecue.

Step 5: Place the wrapped ribs back on the grill over indirect heat, and close the lid. Allow the ribs to cook for one hour.

Step 6: Remove the wrapped ribs from the grill and close the lid. Unwrap the ribs, and return them back to the grill over indirect heat. Then glaze them with your favorite barbecue sauce. Close the lid and let the sauce set up and get tacky on the ribs for 20-30 minutes. 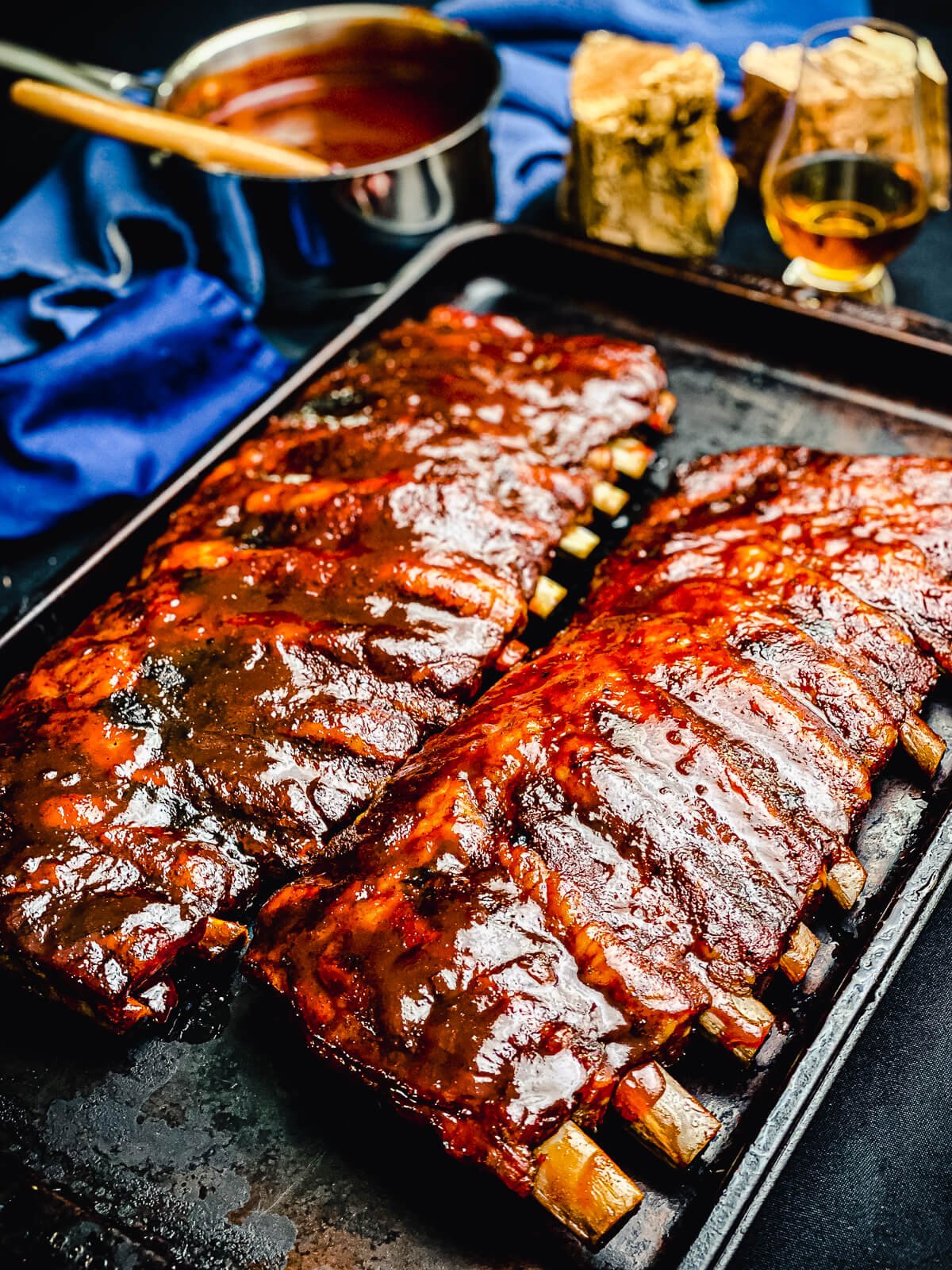 How To Make BBQ Ribs On A Gas Grill

2 thoughts on “How To BBQ Ribs On A Gas Grill”