With a fan built into the base of the unit, its variable-speed airflow-control is connected to a rubber hose that attaches to the bottom of your grill or smoker.

At first glance, with its simple yet classic look, this controller looks like something you might attach to an electric guitar. The BBQube unit is powered by a built-in rechargeable battery. 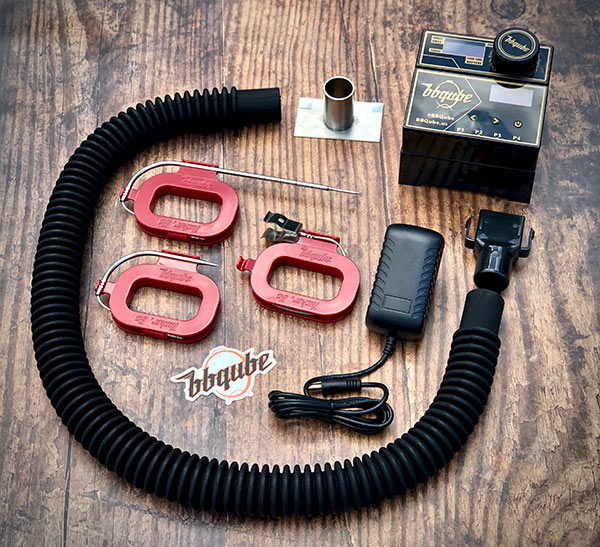 Features of the BBQube are accessed via a click-wheel that is easy to use. It allows access to the navigation menu, which is where you setup and control the BBQube. The controller and temperature screens are bright and easy to read.

The built-in battery-powered thermometer is attached to the controller with magnets. It’s removable and can be used as a temperature-monitoring device separate from the controller base.

The thermometer module can be connected wirelessly over Bluetooth while it is separated from the base-to-monitor temperatures remotely via the BBQube app. The manufacturer claims the battery in the module lasts up to 100 hours when detached from the AC powered controller base.

While the controller base and temperature monitor are docked, the BBQube 12V AC adapter charges and powers the thermometer module and provides power to the variable speed fan.

Charging only occurs when the two are docked together. The included AC adapter is required to power the fan when using BBQcube in ‘pit controller mode’. The BBQube is easy to set up and connect with mobile devices on both Android and iOS platforms. Connecting the BBQube with a mobile device allows for wireless monitoring and data recording. Similar to the device, we found the app interface straightforward and easy to navigate.

Connecting the BBQube to our grill was relatively hassle free. The hose, bottom vent adapter, and probes all installed with ease. With the device connected and grate probe attached, it was time to fire up our grill.

Using hardwood lump charcoal in a kamado grill, the controller took a bit longer than expected to equalize the grill temperature. But once stabilized, the temperature held within ±2-5ºF between fan cycles.

When you add food to the cooker or open the grill to spritz or sauce, you press and hold the BBQube click-wheel to temporarily pause the fan while the lid is open. When you’re ready to get back to cooking, pressing the click-wheel again will resume normal operation.

Normal fan operation resumes 60 seconds after unpausing the controller. This is a useful feature that keeps the fan from ramping up to compensate for the temperature swing when opening the cooker.

We cooked a pork butt and monitored both the ambient grate temperature and meat temperature via the BBQube app and the bright OLED screens on the thermometer and controller. The temperature steadied for about two hours and held ±2-5ºF between fan cycles under observation. We found that the range of BBQube is limited to the reach of the Bluetooth wireless signal. If we went inside and the connection was lost we had to reconnect from our smart device and setup any alarms from scratch when we were back in range. Any data recorded during the cook seemed to be reset as if we had started a new cook. Based on this, we monitored the graphing data at various intervals throughout the cook for a few hours at a time to confirm the temperatures held consistently. The device continued to produce steady and consistent temperatures. While looks aren’t everything, we liked the boxy look and simple controls. The large click-wheel made menu navigation and setup of the controller a snap. We loved the pause feature triggered by holding the click-wheel, used primarily when adding food or peeking inside the cooker.

We like the idea of having the fan in the controller portion instead of hanging from the bottom vent of the grill. The bottom vent connection was easy to install and the kamado adapter came with adjustment clips for fitment in various sizes of bottom vent openings.

The ability to detach the thermometer module and use it as a stand-alone, battery-powered, wireless thermometer is a clever feature. Included thermometer probe wire spools are also a nice touch.

There is no option for built-in or add-on WiFi available with this controller so monitoring from a distance has its limitations.

Step outside the range of Bluetooth and the device will force you to reconnect manually when back in range and any data collected before the disconnect is lost.

The controller tends to want to slide off side tables made of plastic or metal when the hose is connected to the grill and the controller. Adding rubber feet would probably overcome this minor inconvenience.

The BBQube is great for the backyard hobbyist who’s interested in an easy-to-set-up pit controller and thermometer. If your cooker is within Bluetooth range of your bedroom, you’ll get a good night’s sleep with BBQube in control. If your cooker needs attention, you’ll get an alarm on your smart device.

The BBQube is a capable unit with a competitive price. Compared to similar devices, its unique features and ease of operation make it worth taking a close look at if you are considering this type of controller.

For someone who doesn’t require Wi-Fi or cloud connectivity this controller and temperature monitor should meet or exceed your expectations provided your smart device is within Bluetooth range. We hope a BBQube app update will alleviate the inconvenience of having to reconnect after stepping out of range.

The BBQube can also be used as a Sous-Vide controller with an optional add-on called Relay, which has not yet been tested.