They say timing is everything. Traditionally a charcoal user, I had just finished writing the first part of a two-part blog series titled “Now You’re Cooking with Gas” to explain the benefits of gas grilling to my readers when I received an invitation from Lynx Grills to tour their facility in Downey, California. The invitation to observe the manufacturing of what is considered by most to be the world’s premier gas grill was not only perfect timing, but a real honor.  As an added bonus, I was offered the opportunity to cook on their equipment for their team, to include their Executive Chef, restaurateur Andres Dangond. No pressure on me, right?

My day at Lynx started by meeting Creative Director Christina Chung who has an impressive background in the luxury gas grill space, spanning multiple manufacturers. She started the tour with a walk around the Lynx showroom. A “grill guy” like me can only compare this to what it must be like for a jewelry enthusiast to spend a day at a Tiffany’s showroom. I was blown away by the refined appearance of the equipment; but unlike Tiffany jewelry, this stuff had to do more than just look pretty, it had to perform. I was anxious to get some firsthand experience putting it to the test. After donning the proper protective equipment (Lynx had over 800 consecutive “accident free days” at the time of my visit and I wasn’t going to screw that up by not wearing safety glasses), we headed to the shop floor to see the manufacturing process up close. I met with VP of Operations, Voytek Gawora who began his portion of the tour where raw material comes in the bay door. If the showroom displaying this impressive equipment was the Tiffany’s of the grilling world, this was the diamond mine—where it all begins. The conditions were much better though; I was impressed by the cleanliness and orderliness of the operation. I have a manufacturing background, and it was abundantly clear that this facility’s operations were purpose-driven and efficient. 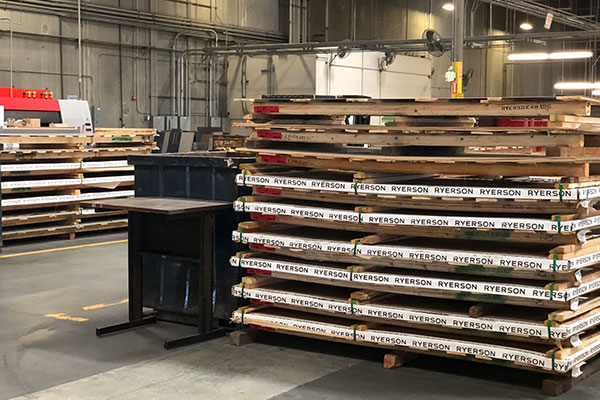 The large sheets of raw material (304 stainless steel to be exact) made their first stop at one of many cutting machines where, according to which product is being produced, basic shapes are cut from the steel. Electronic templates are computer programmed to make the most efficient use of the large sheets of stainless, creating as little waste as possible. Any large-enough pieces of the leftover steel are then used for making brackets, etc. The smallest amount of scrap material is then recycled. Once the shapes are cut, they are sent to enormous presses where they are bent and formed into the basic shapes of the end products. There is no guesswork on these presses. Every component has a specific jig to make each bend exact, identical to the last without deviation. I was impressed by the redundancy of the machines; there were backups so if one machine was down for maintenance, others could pick up the workload and keep manufacturing on schedule. Voytek tells me that the in-house equipment maintenance team makes down-time minimal.

After the stainless steel is bent and formed into the correct shape, it is sent to the welding cell of the operation. No cheap rivets used here! Instead, skilled artisans make precise welds at the various seams and joints. Not just tack welds that eventually rust and break like you see in budget gas grill models, we’re talking full length welds from seam to seam. Speaking of budget-driven gas grills, you’ll notice the fabrication process ends here for those models; the welds (or rivets) are clearly noticeable. Not with Lynx. Next stop, polishing. Every weld is subject to a multipart polishing process where each discolored weld is highly polished by hand to a mirror like finish. This is what turns these hunks of metal into the aesthetically pleasing and stylish jewelry that I saw in the showroom.

Polishing complete, the components then go to assembly and test. This assembly line process is impressive to say the least. This is where wiring harnesses, insulation, burners, knobs, etc. are added to the end product. Every step done is by hand, with each employee inspecting the work of the previous employee (as opposed to the occasional spot check). Lynx believes that quality is everyone’s responsibility, so each employee vigilantly checks to ensure the previous step was done correctly and within specification. Any defects are quickly identified and removed from the process. After assembly, EVERY burner on EVERY grill is test fired and adjusted. It takes time and effort to connect every burner to a gas line and test it, but nothing is left to chance here. The end user can light their grill for the first time with assurance that it has already been lit, tested, and adjusted.

With testing finished, the units are boxed and sent to a massive inventory warehouse where they await delivery to their final destinations. Once the manufacturing portion of the tour came to an end, I went to spend some time with engineering and new product development.  I saw Lynx’s new ceramic burners and a few other goodies in action (more on those burners later). In this section, various components are put through the paces and subjected to extensive testing. It was here that I met Engineering Design Technician, Damian Ibarra whose passion was immediately noticeable. When I asked Damian what his role was he said, “My job is to push everything we make to its breaking point, so a customer never has to experience that breaking point.” That resonated with me. Lynx wants the very best customer experience and they go to great lengths to create it—not only testing something until it works, but testing further until it doesn’t work. That’s how progress is made, and perfection is achieved.

No matter the effort to avoid them, failures are bound to happen in any business. It’s how a company responds to those failures that defines it. My next stop was at the customer service department. Lynx doesn’t outsource this to a call center overseas like so many companies now do; they have a dedicated staff of 10 employees who do nothing but handle customer relations. I was impressed to learn that these employees go through extensive training in all aspects of Lynx, from manufacturing to packaging. That experience enables them to provide real value when a customer calls the customer service line (1-888-289-5969).

I finished my Lynx tour with an opportunity to use their equipment and put it through as much testing as I wanted. There was no pressure from any Lynx employee about how to conduct the tests or conditions for the tests. They truly offered me a “no holds barred/have at it” opportunity. With my grill nerd backpack of electronic test equipment in hand, I started with the 42” ALL TRIDENT Grill. I was able to achieve any temperature range I wanted with slight turns of the knob. The criticism of many infrared gas grills is that they can’t be adjusted to a low enough temperature to create true two-zone heating. I didn’t find that to be the case. In fact, by using only one burner I was easily able to maintain a consistent 225 degrees in the middle of the grill, away from the direct heat produced by the Trident burner. Stay tuned for a full review of this grill.

On to the Napoli Outdoor Oven, which may be my new favorite thing. This oven is truly incredible—achieving stone surface temperatures even above the 700° advertised—and it cooked amazingly well. Again, stay tuned for my full review.

Finally, I was able to test the Sonoma Smoker. I was admittedly skeptical about this one and I’m sure every BBQ purest will cringe at my assessment. I’m an old school guy myself, cooking mostly with charcoal and wood on my offset smoker, so to see a gas smoker with a touch screen interface… let’s just say I was convinced this was a gimmick. But, with three young daughters I’m used to being wrong and, in this case, I certainly was mistaken. The smoker worked extremely well and was surprisingly easy to use, despite my being initially intimidated by the control panel. It produced a very nice smoke ring, and the flavor was very similar to what can be achieved with a traditional offset wood burning smoker. Lynx is definitely onto something with this product.

The People of Lynx

I obviously had a terrific experience at the Lynx facility. Interestingly, I think some of the most valuable nuggets I gathered were from informal conversations I had with various employees. For example, when I asked one employee why it was important that Lynx is made in the USA she responded, “because it creates jobs and employs families.” She went on to tell me about the generations of families that work at Lynx, some having been there for more than 20 years. Others spoke about the innovation that takes place and that certainly was apparent to me. Remember those ceramic burners I mentioned earlier? While most companies are researching alternative metals for a burner, Lynx has made a huge jump to cordierite ceramic for a better customer experience.

As I was testing the equipment I had occasion to speak again with Christina Chung. I asked her what she liked most about working for Lynx. She responded with four distinct reasons that aren’t often heard from employees today. First, she told me she is energized that Lynx doesn’t accept the status quo; they are constantly thinking out of the box and she enjoys that challenge. After seeing the innovations at Lynx first hand, it’s clear that they are a true pace setter, creating the competition instead of reacting to it. Next, Christina told me she loves that Lynx isn’t afraid to take a risk and make a splash with new product development. The third and fourth things—and the most important to her—were the people (whom she clearly adores) and their pride in workmanship. After spending one day walking around the facility, that Lynx pride was more than obvious to me.

Simply hearing all the things people say about their company (and that a company says about themselves) can seem cliché, but I actually saw it in action at Lynx. This personal tour was quite the experience and I am thankful to the entire Lynx team for the opportunity. Finally, I think the best is yet to come as Lynx’s incredible innovations for the coming year go public!