When you think of a delicious smoked pork rib, you probably picture a summertime barbecue on your back porch with neighbors or friends. Meaty pork ribs cook over a fire while their irresistible smell lets everyone in the neighborhood know something good is happening on your grill or smoker. Does it get any better than that? (Spoiler alert: not really!)

But have you asked yourself what are the best cut of pork ribs to choose for your next cookout? People ask me all the time. What is the difference between baby back pork ribs and St. Louis-style pork ribs? Given how often this question comes up, I figured it was worth a post explaining why you might want to choose one over the other. If you really want to nerd out on the nutritional value of baby back ribs, you might find it interesting to know the ribs contain 20 grams of protein and have 248 calories per 3 oz of meat. Have you ever wondered how many ribs you should be getting when you order a rack of ribs to devour during the big game? Baby backs typically have eight to 13 ribs per rack and a rack generally weighs between 1½ to 2 lbs. Because these ribs are so popular, baby back ribs are typically more expensive and their price has gone up over the past few years. That’s not a reason to avoid them, but it is worth keeping in mind when you’re planning a cookout with a large guest list.

St. Louis-style ribs (also known as spare ribs) may not be what you initially picture when thinking of barbecued ribs, but they’ll get you salivating nonetheless. Compared with baby backs, these ribs have more meat on the bone and are fattier, making them a more flavorful choice. Those who are interested in where the spare rib comes from will find it interesting that they are taken from lower-down on the pig closer to the stomach. Upon initially cutting these ribs, the rib tips are removed since they are all bone and cartilage. Once the tips are off, the meatier portion remains as a slab with a rectangular shape.

For those of you who wonder which pork rib cut is the most tender, the meat on St. Louis-style ribs is generally considered tougher than baby backs but can be just as tender when properly cooked. These ribs can be had all across the US, not just in St. Louis and are generally larger than the baby backs. The average weight for a rack is between 2½ to 3 lbs. Since they’re larger, St. Louis-style ribs make a great choice for entertaining a crowd.

Why are they called “St. Louis Style” ribs you ask? In a 30-year span between 1930-1960, roughly 15 meat packing businesses were founded in the St. Louis, MO area. However, the larger meat packers at the time were selling the spare ribs with the rib tips intact, which was wasting 90% of the rib. The smaller packers decided to change up the game by removing the tips, resulting in their rectangular shape. While the trimmed slabs cost consumers more money per pound, the difference was worth it because the slabs included more meat than waste. The meaty, rectangle-shaped racks became known as St. Louis-style ribs.

Overall, both ribs are going to get your mouth watering and taste buds jumping. Which one is better is simply a matter of preference. Do you want a smaller leaner rib or a larger fattier rib? That is up to you, but I would suggest purchasing your ribs at your local butcher if possible, as the quality of the prepackaged ribs at chain grocery stores varies greatly. Regardless of choice, the one thing that’s consistent across all pork ribs is the need for a bib and a roll of paper towels! 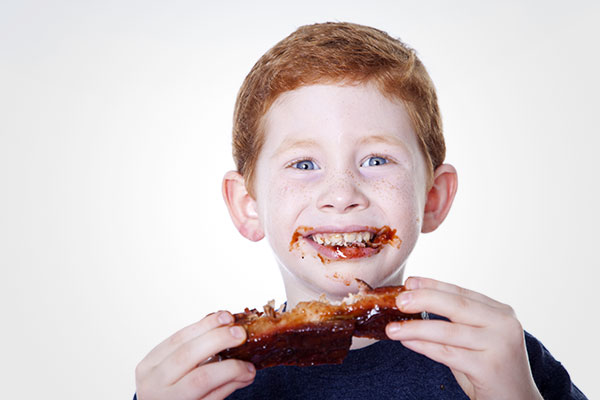