Salmon, whose Alaskan fishing season has recently begun, is the big kahuna of fish, both nutritionally and gastronomically. And rightfully so, says a man who once hated salmon – more on that later.

Wild salmon is gorgeous on the plate with colors ranging from peachy blush to fiery coral that just look sexy. Put it next to any food or on any serving surface and watch this fish positively glow. It’s also extremely nutritious; look up nutritional information and you’ll find that the fish is high in quality protein; a great source of vitamins B3, B5, B6, B12, and D; a fountain of omega-3 fatty acids… you see my point.

It seems like salmon may be the perfect food, but here’s the rub: as a predator fish, high-up on the food chain, your salmon’s sourcing matters. Whatever the fish on your plate ate, you’ll be eating as well. It’s equally important to consider where on the planet your salmon came from. It matters; from both an ethical and nutritional standpoint.

Because the location and diet of your salmon affects the taste, the saga behind those glistening slices of fat-striped sashimi or that crisp-yet-tender seared fillet is a story worth telling.

This blog is, therefore, a tale of two salmon: wild versus farmed, Pacific (specifically Alaskan) versus Atlantic.

The Low Down on Atlantic Salmon

The most commonly available (and often most affordable) salmon you see in the supermarket is Atlantic salmon. Here’s the deal.

Farming fish is not pretty. Some sources argue that certain fish farms adhere to cleaner and more humane practices than others, but the bottom line is that salmon farming is, mildly put, unpleasant. Farmed salmon spend their lives net-caged in high-density environments, fighting for space and resources with other salmon. This life is in direct contrast to their naturally wide-roaming, river- and ocean-traversing habits. Their confinement means that farmed salmon swim continually in their own feces. Gross, right? But think about it: There are no blue porta johns in those net caged environments.

What may be most shocking, farm-raised salmon never sport their natural color. Before harvesting, they’re fed dyes called canthaxanthin and astaxanthin. Why? Because farmed salmon don’t eat krill, that highly nutritious crustacean wild salmon mow down like a late-night turkey sandwich. A krill diet gives salmon its rosy hue, so farmed salmon, without the help of dyes, would be gray. According to Elizabeth Cha of Wired, different retail markets vibe on different shades of salmon. The disturbingly sales-savvy result is the SalmoFan, a 15-color salmon-flesh “paint-chip” wheel that lets fish farmers select their desired color and chemically dose their salmon accordingly.

Atlantic salmon may be affordable, but its production is, both ethically and environmentally, an unsavory affair. As for taste, it’s okay,

Okay, not really. There’s a reason I used to hate salmon. When I first ate salmon, before I knew the deal, I had only ever tried this semi-edible farm raised nonsense and it was just awful.

Fortunately for both the planet and our palates, there is also Pacific salmon—and, more specifically, wild-caught Alaskan salmon.

Salmon are, by nature, freewheeling and highly motivated creatures. They are born in freshwater bodies, swim downstream hundreds or even thousands of miles to the ocean, before swimming all the way back to freshwater regions to spawn. Different species have different timelines for their return from the ocean after they hatch, but they all make the grueling round-trip over the course of their lives.

Wild salmon are nutritionally superior to farmed salmon because they eat actual food, rather than food pellets. They eat a lot of different crustaceans, including the pigment-giving krill. Because they work so hard throughout their lives, wild-caught salmon are leaner than farmed salmon—you’ll notice that the fat ribbons are slimmer, the texture firmer, the taste fuller.

The following rundown on each of the five Alaskan/Pacific salmon varieties out there, in order of richness and fat content, should help you the next time you’re looking for a fresh-caught dinner. Chinook (King): King salmon is adored for its high fat content and lush taste—some people compare it to smoked salmon. If you’re looking for it at the market, you can spot it by its greenish-blue, black-spotted skin and white belly. King salmon are big: a single fish can range between 25- to 50-plus pounds. King salmon have a long season (April through September). The Copper River king’s season, though, is brief—mid-May through late June. King salmon, especially Copper River kings, are usually brought to market fresh and served simply. No need for exotic recipes here, simple salt and pepper and this fish is UH-MAZING. Sockeye: Sockeye is the reddest of the wild salmon, with a fat content slightly lower than that of king salmon’s. The result is a nice balance of flavor and richness, making sockeye a favorite for various applications: canning, salting, smoking, fresh sale, and freezing. Worth noting: Caught from Alaska’s Fraser and Copper rivers, sockeye salmon will have higher concentrations of oils in their scales. The sockeye season runs between May and September and while they are also perfect with just salt and pepper, try some lemon & dill butter with the sockeye. Coho (Silver): Sport fishermen love the Coho for its fighting spirit. With a rich, distinctive flavor, it’s the most available autumn salmon when bought truly fresh or fished straight from the source. Coho salmon are a bit smaller, ranging between 7- to 8- pounds. Its flesh is coral-red, its skin (unsurprisingly, given its alternate name), silver. Coho may be cheaper than king or sockeye, but many people consider it even tastier. It has a firmer texture, thanks to a slightly leaner profile, making it superb for grilling. It’s a good autumn salmon choice. Pink (Humpback): Pink salmon is smaller and milder than the above three species, and it’s distinguished by its pale pink flesh and lower fat content. It earned its nickname due to the pronounced hump on its back. Some palates will find pink salmon a bit mild, but others will love precisely that quality. Pink salmon is a solid introductory choice for someone leery about “fishy” fish. Its season is short, running just from June through July. 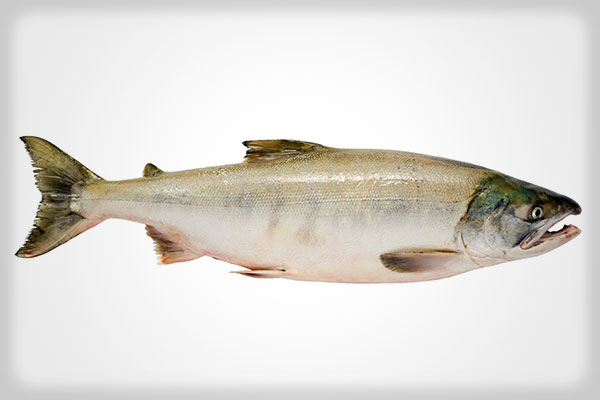 Chum (Dog): Chum salmon stick close to home during their lifetimes, spawning in intertidal waters and therefore having far less distance to cover when they make the trip to saltwater and back. The short lifetime commute for chum salmon means the variety is less fatty by far than other salmon, since it needs relatively few energy reserves to migrate. Chum’s roe, however, is the most prized of all five Pacific salmon varieties. Its season runs from June through October. 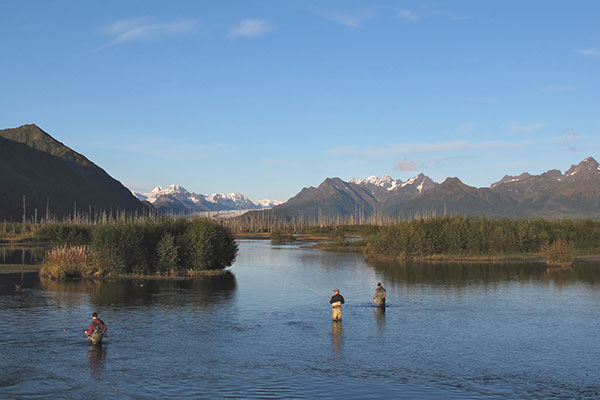 Among the most popular sites for salmon fishing is the Copper River. Popular for a number of reasons, good PR certainly helped, the river is several hundred miles long; its fish are healthy, hardy, and superior in general. According to one source, the Copper River is “a pure, pristine environment that, for five months every year, produces three species of premium wild salmon: Copper River king, sockeye, and Coho.” The river boasts 13 major tributaries, spans a mile in width, and runs at seven miles per hour. Some of the most renowned wild Alaskan salmon are born in the Copper River, whose yearly season has just begun and winds down in late September.

The further a salmon is caught from the place of its birth, the tastier the fish. Why? Because these fish instinctually fatten themselves up to prepare for the swim upstream to spawn. They don’t eat during the entire trek so catching these fish far from their spawning grounds equals an oilier, fuller fat and super healthy catch. Given the Yukon river is 2,000 miles long compared to the more popular Copper River’s 300 mile span, it stands to reason the fish swimming up the Yukon would be plumper to prepare for a longer journey. The more I think about this the more I think I may have some salmon DNA in me, since I spend much of my life eating like there’s a 2,000 mile swim ahead of me.

There are a number of rivers in Alaska that offer amazing fish, the Copper and the Yukon being just two of the more popular waterways.

Wild-caught Alaskan salmon is the clear winner in every category—it’s absolutely the best choice, ethically, environmentally, and nutritionally. And it tastes so, so good.

Yes, wild-caught Alaskan salmon costs more than farmed salmon, and yes, it’s a seasonal product. But remember the many options available for accessing this fantastic fish year-round. You can buy Alaskan salmon fresh in-season and freeze it for year-round use. You can smoke it and freeze it, too, for use in dips or sliced with your choice of condiments all year.

I’ll come right out and say it: don’t eat that crap you find at the local big box store, it’s awful on so many levels. Eat wild caught salmon and feel good about it.