Tri-tip, dollar for dollar and from a value perspective, is my favorite cut of beef. I was first introduced to tri-tip while stationed in Southern California circa 1993. It was one of the few cuts of meat I could afford at the time and probably the first cut I “mastered” if there is such a thing (it’s still really cheap in California, by the way).

This inexpensive cut is packed with flavor and can be cooked countless different ways. Today, I’m going to talk about my preferred method of cooking a tri-tip: smoked and seared. You don’t have to have a smoker for this—almost any grill will work.

The tri-tip recipe I’m sharing is very basic and straightforward. Anyone new to grilling can do this, and the old pros love it as well. But first, I’m going to answer a few common questions about tri-tip, then I’ll go over a few tips for cooking tri-tip, and then we’ll get into the recipe. Given that this blog is a “how to,” the recipe itself is less important than the technique.

I’ll share how I like to season tri-tip, but feel free to season how you like it. The value in this blog is in learning about tri-tip and how to cook it. I call this a foundational recipe, sort of like my Smoked Mac & Cheese. Understand the foundation of smoking and searing a tri-tip, then make it your own with personal seasonings or marinating preferences.

OK, on to some pretty commonly asked questions about tri-tip.

Tri-tip is cut from the bottom sirloin subprimal of a steer. It’s actually the bottom portion of the bottom sirloin and is triangular in shape, which is where the name tri-tip comes from. It’s also called the Santa Maria roast (among other names) since the cut itself originated in California. The tri-tip “roast” can be cut into steaks, though that’s less popular. It’s well marbled and full of flavor, but unlike a rib eye or a strip steak that I prefer medium rare, I recommend cooking this cut to a slightly higher serving temperature, around 130° F. Left too rare, it will be chewy.

Where To Buy Tri-Tip

This is probably the question I am asked most often. I live on the East Coast and tri-tip isn’t readily available here so I get tri-tip online. If you’re on the West Coast, they’re available at just about any grocery store. I’m always scratching my head as to why this cut hasn’t gained more popularity outside of California.

How To Prepare Tri-Tip

Unlike a brisket, which requires a lot of trimming, the tri-tip doesn’t require quite as much. In fact, most of the time they come pre-trimmed. Oftentimes the least expensive tri-tips in California will be untrimmed and in the meat display at the butcher’s counter.

If you get a tri-tip that requires some trimming, it’s super easy. There’s no real fat cap to deal with, but quite often you’ll have to trim off the silver skin that’s pretty prominent on this cut. Simply slice it off with a sharp boning knife and call it a day.

How To Cut Tri-Tip

Cutting it against the grain for service makes for a better mouth feel. Remember, this is a very inexpensive cut of meat and it can get chewy. By slicing against the grain, it’s certainly less chewy and results in a more pleasant eating experience.

How To Cook Tri-Tip in the Oven

This is the question I’m asked most often when I serve this to guests who ALWAYS love it, but may not own a grill. You can absolutely oven roast tri-tip. I suggest following my guide for reverse sear using the oven. Just follow the directions, and though you won’t get the smoke flavor, you’ll be more than satisfied—until you decide you can’t live another day without a grill.

The Smoke: Smoke adds an amazing element of flavor to tri-tip. If you can, kiss this cut with some quality hickory or oak smoke.

The Sear: After smoking the tri-tip, sear it quickly at extremely high temperatures, 600-700° F if possible, in order to quickly create the nice crusty bark that’s so flavorful.

The Flip: When searing, flip often…every 20 seconds or so. You don’t want the same side of meat sitting too long above those extreme temperatures, so flipping often will build a crust without overcooking the meat.

The Temperature: This cut is best served medium-rare plus, less than that and it gets a bit chewy.

Be sure to monitor the meat’s internal temperature with a reliable quick-read thermometer and pull it off the grill after searing it to 127° F.

The Rest: Tri-tip tends to get extremely tight after being seared, especially around the thickest part of the meat. So, let it rest at least 10 minutes before slicing, and if it’s a larger tri-tip don’t be afraid to let it rest 15 minutes. Just be sure to tent it with foil so it stays warm.

How To Smoke and Sear Tri-Tip

How To Smoke and Sear Tri-Tip

Step 2: While the grill is preheating, combine all ingredients for the rub into a shaker bottle. Evenly coat the entire tri-tip with olive oil, and then liberally season all sides of the roast with the rub.

Step 3: Add one hickory wood chunk to the hot coals of your grill, and place the tri-tip over indirect heat. Insert a reliable leave-in thermometer into the thickest portion of the meat and close the grill’s lid. Allow the meat to smoke until the internal temperature reaches 115° F, about one hour.

TIP: Placing the meat on a cooling rack on the grill makes it easy to transport without disturbing the crust formed by the oil and seasoning.

Step 4: Remove the meat from the grill and stoke the coals for high direct heat. Get coals as close to the cooking grate surface as possible. Meat should have the beginnings of a nice bark starting to set by this point.

Step 5: Place the meat directly over high heat and flip every 20 seconds. Continue this for about five minutes, or until the internal temperature reaches 127° F.

Step 6: Remove meat from grill, tent with foil, and allow it to rest for at least 10 minutes before slicing and serving with chimichurri sauce or herb butter. 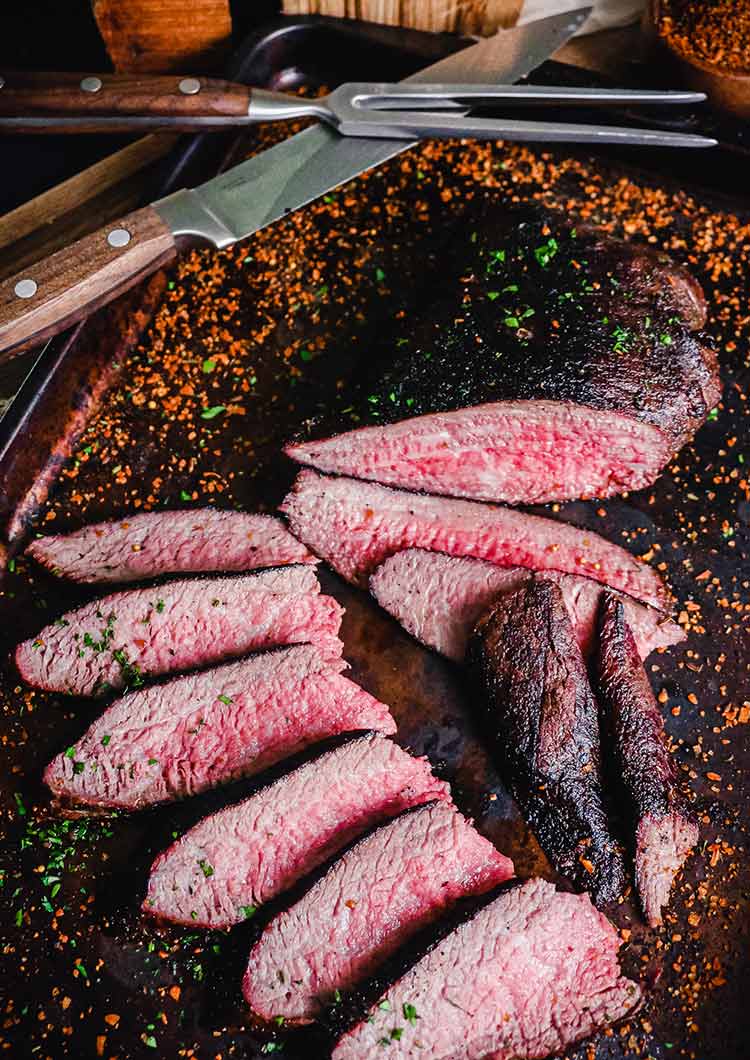 How to Cook Tri-Tip: Smoked and Seared

Tri-tip, dollar for dollar and from a value perspective, is my favorite cut of beef. I was first introduced to tri-tip while stationed in Southern California circa 1993. It was one of the few cuts of meat I could afford at the time and probably the first cut I “mastered” if there is such a thing (it’s still really cheap in California, by the way). This inexpensive cut is packed with flavor and can be cooked countless different ways. Today, I’m going to talk about my preferred method of cooking a tri-tip: smoked and seared. You don’t have to have a smoker for this—almost any grill will work.