In the world of outdoor cooking, knowing the temperature of what you’re cooking as well as the temperature of your grill or smoker are important factors in delivering a perfectly cooked meal—regardless of the type of meat you’re cooking. The tool you need for this job is a remote read thermometer. This device measures temperature and carries that information by wire back to the thermometer’s transmitter, or “brain”. Many remote read thermometers today also have the ability to transmit this information via Wi-Fi to your smart device. Today, we are looking only at units that offer the Wi-Fi option.

To make these units even more versatile, some manufacturers have also added a companion piece to the thermometer: A small blower fan, which comes with some units and is an add on for others, is used to maintain the temperature of a charcoal or wood fire cooker at a set point which you select. This is done by regulating the airflow to the fire. The combination of a remote read thermometer and a blower are known as a pit temperature controller. For the most part, these blower fans are intended for low and slow cooks. ThermoWorks, the maker of the Signals, has been the gold standard in the Wi-Fi meat thermometer industry for years because of their extremely accurate temperature readings and ease of use. The Signals is a four channel thermometer that can be used stand-alone, connected to your smart device via Bluetooth, or connected to Wi-Fi using the ThermoWorks app. The Signals ships with four temperature probes: three meat and one cook chamber probe, and has a temperature range of -58°F to 572°F.

The built-in battery on the Signals should give you 16 hours of run time. The unit can also run the with the supplied 110 to 12v adaptor. It’s important to note that the supplied power adaptor is 12v, other USB power supplies are not 12v. You can add the optional ThermoWorks Billows fan to your Signals giving you a complete pit temperature controller. The Thermoworks app will store data from your last 10 cooking sessions. You can also download the data to your smart device. We found the ThermoWorks app to be simple to set up and very user friendly. Check out our full review of the Signal with the Billows. 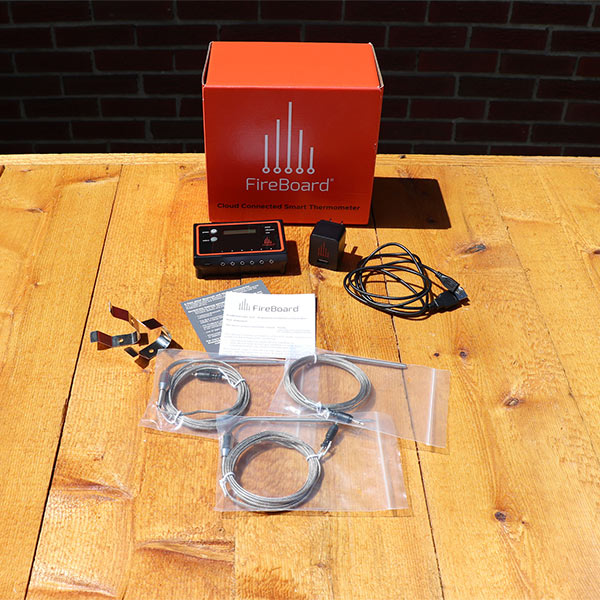 The FireBoard is a six channel remote read thermometer. The basic kit ships with one probe to monitor grill temperatures and two meat probes. It is expandable up to six probes, and has a temperature monitoring range of -94°F to 752°F. Like the Signals, a fan may also be added to create a complete pit temperature controller.

The unit’s built in battery can run 24 hours on a charge and can be connected to a 110v outlet. It’s both a Wi-Fi and Bluetooth thermometer that’s very easy to set up. Your cook data is available both on the app and the online dashboard. FireBoard has gained a great deal of favor with backyard cooks due to its ease of use, its compact size, and offering more channels than most other thermometers. The unit’s LCD display is smaller than some other units though, so if seeing smaller displays is a challenge for you, this should be considered.

Also unique to FireBoard is the option to use either Thermistor or RTD type probes, depending on which you would prefer. There is no price difference between the two. The FireBoard ships ready to be used with the Thermistor probes. If you opt for the RTD probes you will need to make a simple manual change in the FireBoard setting.

The Flame Boss 500 is a grill or smoker thermometer/pit controller that ships as a complete package. It arrives with one cook chamber probe, one meat probe, and the blower fan. It’s expandable up to three meat probes with the additional purchase of probes and connectors.

WORD OF CAUTION: The metal surrounding the Flame Boss fan has EXTREMLY sharp edges. So much so that we recommend wearing gloves while handing the fan. The CyberQ Cloud comes from the folks at BBQ Guru, the first company to bring pit temperature controller to market. The CyberQ Cloud is a two channel thermometer and ships with one cook chamber probe, one meat probe and a BBQ Guru Pit Viper fan. Like some others, it is expandable to three meat probes at an additional cost. The CyberQ Cloud runs on a supplied 110v outlet or with an external 12v battery.

Unlike the others, there is no app available for the CyberQ Cloud. There are three ways to control your CyberQ Cloud:

Use this mode to have your Wi-Fi enabled devices connect directly to the CyberQ Cloud. This is helpful in the initial setup of the device. You can also use HotSpot Mode to connect your CyberQ Cloud to your home Wi-Fi then onto the Share My Cook Setup.

Use Sharemycook.com to monitor control and record your cooks from your computer, tablet, or Wi-Fi enabled smartphone.

Because the share to social media menus is constantly in the way making things difficult, we recommend doing the initial set up on your desktop. The Tappecue Touch is a four channel thermometer. It is available in a two probe or a four probe package and is expandable to eight probes at an added cost. Tappecue has also developed a “Dual Sensor Probe”. This probe acts as a meat probe and a cooking chamber probe at the same time and is also available for an additional cost. You cannot add a controller fan to the Tappecue as of this writing, Fall 2019, but we understand that one will be released by Tappecue soon.

The unit is powered by an internal battery with a listed run time of 20 hours and can also be powered by a 110v outlet. It is operated by touchscreen, can be used as a stand alone thermometer or be connected directly with your smart device or via the internet. Tappecue stores your cooking data on the Tappecue cloud. After storing five cooks in one month there is a service fee to store additional data. The fee is $1.99 for a single cook or $9.99 per month for unlimited cooks. This was a bit disheartening because there is no mention of that pay wall until you look deep into the documentation of the Tappecue Touch. We would like to see this information a bit more upfront to consumers.

We do love the look and feel of the Tappecue Touch. We also love the Duel Sensor Probe which is rarely offered and solves a problem for many. That said, getting the Tappecue up and running was somewhat challenging. We were successful on the third attempt; our struggles involved the app and the interface/touch screen layout.

For example, when naming each probe on the screen there is a switch within the app to toggle on if you are using a “Dual Chamber Probes/Splitter”. (This is when you will be using two probes in one channel via a splitter.) This toggle falls right on the very edge of an iPhone 7 screen and can be a bit tricky to toggle off and on. A stylus is included to assist and is somewhat helpful. Additionally, there is no insertion point within the data fields. The only way to tell if you’re actually in the data field is to start typing.

We were able to overcome all of the challenges with the set up on our own without the assistance of tech support but we did find the process frustrating at best. Just as a point of clarity: A single channel of certain remote read thermometers is used to monitor two individual probes. That is how a two channel remote read is able to monitor four probes at once.

When it comes to remote read Wi-Fi thermometers you certainly have options. Most companies offer different packages to suit your needs and allow you to buy pieces separately to expand your unit as you see fit.

While it is certainly possible to cook great food without a remote read thermometer/pit controller, they do make things much easier. They also give you the freedom to multitask during your cook and still keep an eye on things. Perhaps most importantly, they ensure a consistent approach to cooking, essential for great food EVERY time. The bottom line is they will without a doubt make you a better cook, faster.